The carbon dioxide and nitrogen in the ratio 1: 9 were left in the experimental equipment.

This method was used to test the mixture of gases entering the equipment
Add to the products of combustion of combustible hydrocarbons.

A certain amount of water also entered the equipment, which contained the innovative catalyst. The equipment was heated up to 150 degrees. 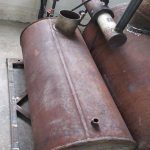 The carbon dioxide passing through the heated catalyst was converted to carbon monoxide and oxygen.

Carbon monoxide then combines with the hydrogen and oxygen released from the water to form a mixture of combustion gases (including various hydrocarbons) and exits the equipment.

The mixture of gases was able to burn, getting a high temperature.