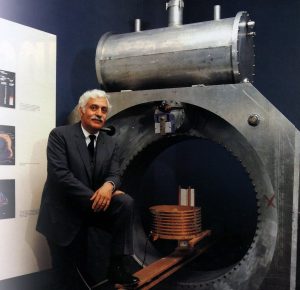 Raymond Damadian (born March 16, 1936) was one of the inventors of magnetic resonance imaging.

Raymond Damadyan was born on March 16, 1936 to an Armenian family in Melville, New York. In 1956, he received a bachelor’s degree in mathematics from the University of Wisconsin-Madison, and later, in 1960, a doctorate from Albert Einstein Medical College in New York. At an early age he was engaged in art, playing the violin.

In 1971, Harvard graduate student Damadyan reported in an article in the journal Science that tumors և normal tissues respond differently to nuclear magnetic resonance. He was the first to suggest using this mechanism for early diagnosis of cancer. However, the initial works of the scientist fail. In 1974, Damadyan received the first patent for the diagnosis of malignant tumors in the field of magnetic resonance imaging. The patent was issued for the use of MRI for “observation of the human body to determine the localization of cancer.” However, as a result of that observation, no specific method of image production was determined.

In 1978, Damadyan founded his own FONAR company to produce Raymond Damadian MRP cans. Damadyan’s “Centralized Technology”, however, turns out to be less effective than

Mansfield և Lauterburg gradient approach, and sales volumes do not live up to expectations. Damadyan later collaborated with one of the inventors of a transplanted pacemaker, Wilson Greatbatch, to develop a MRI cardiac pacemaker. Damadyan has discovered a “stable system” of MR և և has 15 MRP centers in the United States.

In 1988 Damadyan received the National Order of Technology. The first full-body scanner is now in the National Gallery of Inventors’ Hall of Fame (Agron, Ohio, USA). His works have gained recognition in a number of US universities. In 2001, he received the Lemelson-MIT Award as “the man who invented MRI scans.”

The 2003 Nobel Prize in Medicine was awarded to Peter Mansfield և Paul Lotterburgh for their MRI findings. And if the Nobel rules allow dividing the prize among three, Damadyan is not recognized as a winner. The debate over who played what role in the development of MRP has been going on for many years. In 2002, Damadyan announced, “If I had not been born, would MRP have existed?” I do not think. What if it were not for Lotterburg? Sooner or later, I would get to the heart of the matter. ”