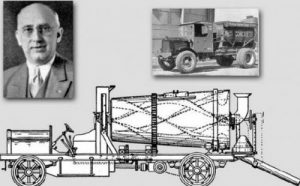 Stepan Stepanyan – invented in 1935 a mobile concrete mixer on a truck chassis, which gave a huge boost to the entire world construction business (US patent # 1,935,922). In 1916, Armenian inventor Stephan Stepanyan’s patent for the first concrete mixer truck was initially rejected, reportedly due to the belief that the truck would not support the weight of the concrete mixer, according to other sources, due to the fact that Stepanyan did not have US citizenship. However, in 1928, Stepanyan reapplied and in 1933 the patent was approved.