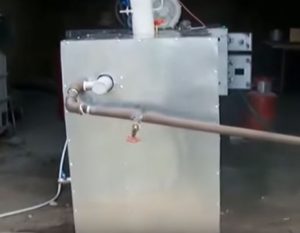 The project is initiated by the Noyan Tapan Foundation, which supports science, the development of innovative technologies and promising solutions. The Foundation is a member of the Noyan Tapan Holding Group established in 1991 (Yerevan, Armenia). The director of the foundation is the founder and chairman of “Noyan Tapan” Holding, Ph.D. Tigran Harutyunyan.

• The aim of the project is to prepare, further develop and sell special converter equipment created for the purpose of saving natural gas created by the Fund, and to establish a plant engaged in the mass production of such equipment.

• Our project envisages the development and operation of a new natural gas converter, which will save at least 40% of burning natural gas, as well as significantly reduce harmful emissions from natural gas combustion. It is obvious that the reduction of costs for heat energy is beneficial for everyone, but in this regard, primarily consumers of large volumes of natural gas are interested. The beneficiaries of our project are primarily large consumers using natural gas, including industrial enterprises using natural gas stoves, district apartment buildings, school-kindergarten boilers, greenhouses, etc. Our preliminary research has shown that the vast majority of businesses are willing to purchase such cost-effective equipment at a reasonable price, as the use of such equipment will significantly reduce their cost of heat, which will reduce the cost of various products and services. In this regard, the fact that the safety rules of operation of these devices are the same as any other device running on natural gas, and the converted gas can be used in all equipment for natural gas, and does not need new types of equipment.

• Our strategy is to prepare and install one device in real working conditions, then through marketing work to increase their production and organize the sale of devices. This strategy will lead to self-financing and profits within a year.

MAIN TRENDS IN THE SPHERE

Alternative energy is becoming more and more important in the world economy every year. The steady growth of the world’s energy consumption contributes to the economical use of alternative energy projects, including by increasing the efficiency of traditional energy sources.
The use of clean technologies of scientific and technological innovation is very important for the sustainable development of any country, as well as for ensuring competitiveness, especially when it comes to energy saving. The proposed innovation is aimed at adapting the scarcity of energy resources, overcoming dependence on them. 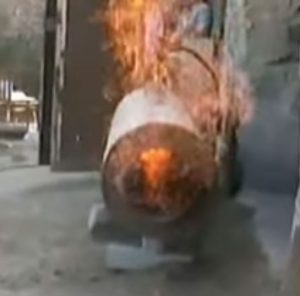 The cost of energy usually has a significant impact on the state of the economy as a whole. The price of natural gas in Armenia and not only here is quite high and hinders the development of the economy. To overcome these problems, it is proposed to design and operate a new natural gas converter, which will save at least 40% of burning natural gas, as well as significantly reduce harmful emissions from natural gas combustion. The introduction of the proposed innovation will dramatically reduce the cost of natural gas, contribute to economic development, improve the living standards of the population and overcome poverty. It is especially useful in terms of environmental protection, risk reduction due to global climate change, as well as greenhouse gas reduction and energy efficiency.

The use of the device will significantly reduce the cost of thermal energy, which will reduce the cost of various products and services. When using the device, the amount of harmful gases emitted into the environment during combustion is significantly reduced.
The safety rules for the appliance are the same as for any other appliance running on natural gas.

THE STRATEGIC OBJECTIVES OF THE PROJECT

• Establish a plant for the production of natural gas-saving conversion equipment in Armenia by establishing an Open Joint-Stock Company, which will involve hundreds of thousands of shareholders, including those from the Armenian Diaspora.
• Sale of conversion equipment manufacturing licenses based on relevant agreements
• Production of large switching equipment (500-1500 MW) based on received orders Implementation of targeted projects worldwide:

• Production location: Republic of Armenia
• Productivity from the beginning of the project implementation: 200 equipment per year (with a total capacity of 200 megawatts)
• Nominal productivity: 1,000 units of equipment per year
• The cost of the equipment is calculated based on the capacity of $ 50 for 1 kW of thermal energy produced. It is planned to produce equipment of different capacities.
• The value of the license agreement has not been determined yet.

The proposed Converter is an unparalleled device in which methane (natural gas) is converted into a mixture of combustible gases with water vapor. Hydrogen (which is one of the innovations used by our team in this device) is released from water vapor by a catalyst activated in a special low temperature range, through which methane is converted and mixed to become an additional source of energy. This, in turn, allows methane consumption to be reduced by at least 40% for the same amount of heat energy.

The catalyst used in the converter does not contain toxic substances, it is safe, it has no working time limit, it just needs to be heat cleaned after every 10,000 hours of operation.

As already mentioned, the device we offer works based on the use of a new method of obtaining hydrogen. The project uses a little-researched, little-known and inexpensive technology for obtaining hydrogen as a result of thermochemical reactions with the help of a special catalyst, which allows to increase the efficiency of such devices after further development.

The safety rules for the device are the same as for any other natural gas appliance. Converted gas can be used in all natural gas equipment and does not require new equipment.

The capacity of our converters can range from 200 kilowatts to several tens of megawatts, which greatly expands the range of use of such devices.

An experimental-production sample of the converter equipment with a heat capacity of 1000 kW / h was prepared by the Fund.

The known proven natural gas reserves are about 200 trillion cubic meters. The production and use of natural gas is 3.4 trillion cubic meters per year. Most of the extracted methane (about 85%) is used as fuel, including for electricity production, which in 2014. According to the data, the world has a total mass of harmful gases, including more than 40 billion tons of CO2 and about 65 million tons of NOx per year. In this case, the use of converters becomes very beneficial not only economically but also from an ecological point of view, as the amount of harmful emissions is significantly reduced.

The use of gas-saving converters significantly reduces (at least 40%) the cost of heat generation. The device uses a certain amount of water, but the cost of water used compared to the cost of gas is so low that it can be ignored in the calculations.

So far, our team is able to make converters for equipment with a consumption of 200 kW and high heat capacity, but within the framework of this project we plan to do research and development to make converters for lower power devices, which will significantly expand the device market. Buyers can be gas consumers of individual apartments.

The price of the device depends primarily on its power. We plan to sell the device at such prices that it does not exceed half of the cost of gas consumed to receive the given heat capacity in a year at current prices in Armenia. Therefore, the potential buyer of our device, buying our device, will not spend more than planned in the first year, and from the second year will save at least 40% of the amount allocated for the purchase of gas in previous years.

This fact shows that in the coming years there will be no demand difficulties associated with the sale of our converter equipment. At the same time, our team will be required to expand production