“Noyan Tapan” Foundation presents innovative-breakthrough technologies aimed at obtaining useful chemicals from combustible combustion products into the atmosphere instead of releasing them, as well as saving hydrocarbon fuel.

The foundation is developing a number of innovative and groundbreaking technologies aimed at converting the products of combustion of natural gas and other hydrocarbons into other useful substances, including liquid fuel, which are essentially saving burning fuel, which are going to enter the market.

The A-6 technology chain is designed to save 35-45% of the gas burned during the combustion of natural gas (methane) and to convert the flue gases from that combustion into industry and chemicals required in the economy. Operates without additional energy costs for that purpose.

System A-6 is a chain of technologies based on the combustion of natural gas (methane), which generally eliminates emissions into the atmosphere and allows to obtain targeted thermal energy by consuming 35-45% less methane, in addition to receiving a number of useful chemicals. including hydrogen (H2), nitrogen (N2), nitric acid (HNO3), methanol (CH3OH), etc …

All nodes of A-6 technology chain can be used in different technology chains for different purposes. They include innovations developed by the company, synthesized new catalysts, the use of which makes the described processes possible and economically profitable.

The use of the A-6 system is highly expedient for a large number of countries. and where coal burning has already created a very dangerous environmental situation for human health (for example, China, Russia, etc.), and in countries that have coal reserves and need alternative fuel for cars, such as cheap methanol and hydrogen. 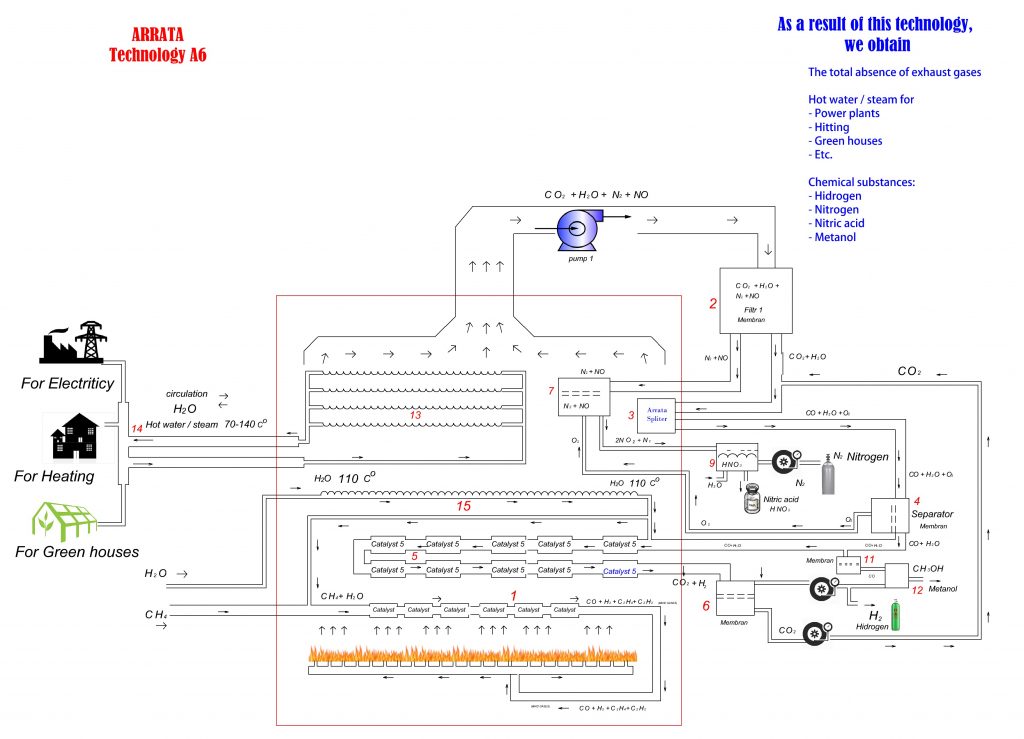 As can be seen in the diagram, the technological chain begins with a simple combustion of natural gas (methane) in a furnace in which, in addition to the circulating water system, which performs a useful job, [13] there are also several technological nodes [1], [3], [5], [7], [15].

When natural gas burns in a furnace to do its intended job of heating circulating water for consumer needs, [13] it also heats the first [1] and fifteenth [15] nodes in the furnace. In the fifteenth [15] node, water bubbles are formed, which, joining to a certain extent with the methane going to the burner, enter the First node [1].

The first node [1] is the first node of the A-6 technology chain, where methane and water vapor are converted to a mixture of combustible gases (CO, H2, C2H4, C2H2,) and a small portion of the heat of an innovative catalyst developed and synthesized by the company. They go to the burner. The smoke generated during combustion is pumped to the Second Node [2].

The second node [2] separates the flue gases into two parts. Nitrogen (N2), nitrogen monoxide (NO) go in the first direction, and carbon dioxide (CO2) and water vapor (H2O) in the second direction. The latter are pushed to the Third Node [3] (Arrata divider).

The third node [3] (Arrata splitter) is the most important node of the A-6 system, where due to breakthrough innovations, some of the heat energy generated by the furnace combustion and another innovative catalyst developed by the company, carbon dioxide (CO2) is released into carbon dioxide (CO2). CO) and oxygen (O2). The mixture of these gases together with water vapor (H2O) enters the Fourth Node [4].

The fifth node [5] converts the carbon monoxide (CO) and water droplets (H2O), including, if necessary, the additional water vapor (H2O) received through the Fifteenth node [15], converts it to carbon dioxide (CO2) and hydrogen (H2). , which are pushed to the Sixth Garment [6]. All this is possible thanks to another innovative catalyst developed by the company and the heat from the combustion of gas.

In the sixth node [6], which is the membrane separator, carbon dioxide (CO2) and hydrogen (H2) are separated from each other. Hydrogen can be used at will, stored in cylinders or burned in the furnace, with some directed to the Twelfth Node [12] for methanol production. Some of the carbon dioxide (CO2) is pumped to the Third Node [3] (Aratta Separator) again to participate in the system, and the other part is pumped to the Twelfth Node [12] to obtain methanol.

Nitrogen (N2) from the second node [2] in the seventh node [7], nitrogen mono the oxide (NO) and the sulfur dioxide (SO2) are converted and separated from each other by oxygen in the Fourth Node [4] by means of another special innovative catalyst. Separated nitrogen (N2) and converted nitrogen dioxide (2NO2) are pumped to the Ninth Node.

The ninth node [9] is designed to receive nitrogen and nitric acid. Here nitrogen (N2) separates from nitrogen dioxide (2NO2) and leaves the system. Nitrogen can be pumped into cylinders and used. And 2NO2, when attached to water at this junction, produces nitric acid (HNO3), which can be stored.

In the eleventh node [11], some of the CO released from the water vapor coming out of the fourth node [4] is pumped to the twelfth node.

In the twelfth node [12] CO combines with hydrogen to form methanol (CH3OH), which can be stored and used as a liquid fuel.

It should be noted once again that all these processes take place in parallel with the direct useful operation of the furnace, in parallel with the production of hot water or water vapor needed by the consumer, which can be used in thermal power plants, heating residential or industrial areas, greenhouses or any other purpose.

Due to this technological chain, the amount of natural gas combustible for energy purposes is reduced by 35-45%, combustion becomes absolutely harmless to the environment, as there are simply no emissions, and from the obtained chemicals (hydrogen (H2), nitrogen (N2), nitric acid ( HNO3), methanol (CH3OH), especially hydrogen and methanol are in great demand in industry and energy.