The problem of drinking water

It is a well-known fact that 70% of the earth is covered with water, but only 3% of that water is suitable for drinking. That is why in many countries of the world the problem of fresh water shortage is acute, and people are constantly trying to find methods to desalinate and make fresh water.

All known and used seawater desalination methods, including chemical, electrochemical, ultrafiltration, refrigeration, distillation, and other methods, are highly energy-intensive and costly.

The solutions we offer

In this project we propose to use an improved chemical method of desalination of sea water.

In the classical chemical desalination of seawater, special substances are added to the seawater – neutralizers (reagents), which result in insoluble salts, which are separated from the water. However, these neutralizers are quite expensive, they are needed in large quantities (the amount of neutralizer used should be at least 3-5% of the fresh water obtained), once used they are no longer suitable for use, the resulting salts are toxic, and so on. That is why the chemical method of desalination of sea water is rarely used.

Our proposed technology has made it possible to continuously restore the used neutralizer (reagent), and the energy needed for recovery is obtained from seawater.

The technology we have developed, unlike all the methods currently used, is incredibly cheap precisely because it does not provide an external energy source, but uses the energy of the sea water. The technology also does not emit any emissions into the atmosphere, it is environmentally friendly and harmless.

Thus, the technology we offer envisages the following stages:

hydrogen is obtained from water
With the help of hydrogen combustion energy, specially formulated neutralizers (reagents) are recovered and reusable
Due to the recovery, the sea water is continuously desalinated with a neutralizer that maintains the required amount

Innovations developed by the company are applied in all nodes of the technological chain of the A-7 system, new catalysts are synthesized, due to which the described processes become possible and economically profitable. 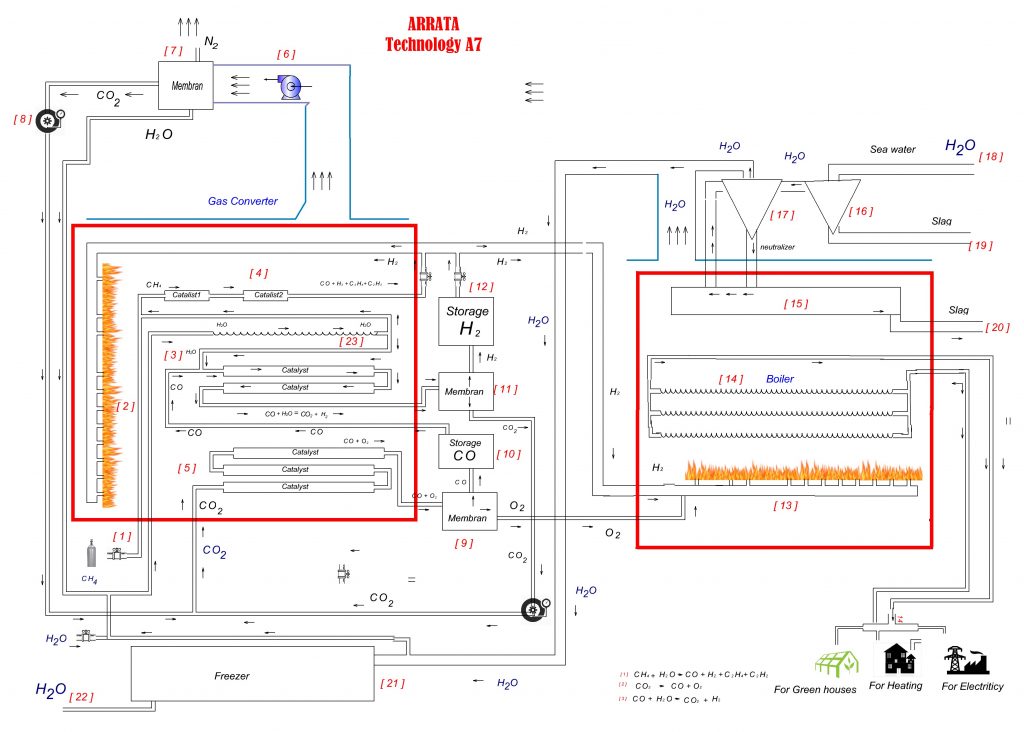 As shown in the diagram, the system consists of two combustion chambers, a number of nodes inside and outside them.

Methane combustion for this system is intended only to start the system and bring it to its working mode. Once the operating mode is reached, the methane input is stopped and the system no longer needs any external energy carriers.

When methane [1] enters the system, it first enters the fourth node [4], where one of our innovative catalysts is placed, passes through it, reaches the burner [2] and burns by heating [3], [4], [5], [23] nodes. As long as the system is cold, no reaction occurs. As the system heats up (up to 150-200 degrees C), a small amount of fresh water enters the system, which heats up [23] and turns into steam. Some of the vapor mixes with the methane to enter the fourth node, [4] where a mixture of methane and vapor is converted into a mixture of combustible gases by means of an already heated catalyst. (CO, H2, C2H2, C2H4, etc.). The mixture of these gases is also directed to the burner [2] and ignited. At the same time, the combustion products are pumped to the membrane [6], where the nitrogen (N2) contained in the combustion products is released from carbon dioxide (CO2) and water vapor (H2O). Nitrogen is released into the atmosphere (if desired, it can also be utilized and used). In the membrane [7], carbon dioxide (CO2) and water vapor are also separated. The water vapor turns into a liquid and returns to the system, and the carbon dioxide (CO2) is pumped [2] to the fifth node [5].

In the fifth node [5] is placed another catalyst that we have developed, under the influence of which carbon dioxide (CO2) is converted to carbon monoxide (CO) and oxygen (O2) at temperatures up to 150-200 C. These gases separate from each other in another membrane [9]. Carbon monoxide accumulates in the storage node [10] and re-enters the system, already the third node [3], where it combines with the rest of the water globes [23] to convert carbon dioxide (CO2) and hydrogen with the help of another innovative catalyst. H2).

From now on the system works only with hydrogen. The product of hydrogen combustion: distilled water is partially removed from the system and used, and the rest is returned to the system to participate in the hydrogen production process.

Freshwater separated from saline solutions, combined with water vapor from hydrogen combustion, is pumped to the 22nd node [22] and can now be removed from the system and used.

As we can see, our proposed system is based on some fundamental innovations that are not yet used anywhere, namely ․

– conversion of methane and water vapor into a mixture of combustible gases (node ​​4),

– Conversion of carbon dioxide to carbon monoxide and oxygen (node ​​5),

– Obtaining hydrogen from a mixture of carbon monoxide and water (node ​​3).

It is these innovations that provide the heat energy needed to recover the neutralizing fluid without using an additional energy source.

The availability of such an autonomous source of energy makes it possible to use other methods of desalination of sea water, including simple distillation.

The advantage of the modified chemical method we offer is its high productivity. We offer to prepare a plant for receiving fresh water from sea water, which will be able to produce 100 tons of fresh water per hour without the use of external energy.

According to our preliminary estimates, the construction of such a factory will cost 450-500 million euros.

Before the construction of the plant, in order to be sure of the effectiveness of the offered technologies, we suggest preparing a small-scale working model of the plant, which will turn 50-100 liters of sea water per hour without the use of external energy.

The production of a working model will cost about 300-350 thousand euros.